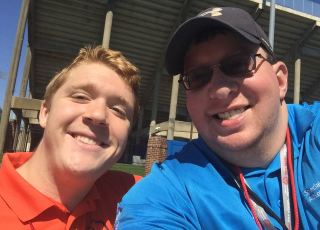 If you’re a Delaware kid in middle school or high school, 15-year-old Joseph Till recommends you make plans to get your heart checked out Saturday.

Till, a freshman at Brandywine High School, was among almost 200 kids who showed up for the first “Heart In The Game” cardiac screening at Springer Middle School in January. The second is planned for 10 a.m. to 2 p.m. Saturday at Alexis I. du Pont High School in Greenville and about 150 kids already are registered, according to organizer Greer Firestone.

The free screening includes an electrocardiogram (also called an EKG or ECG) – a five-minute procedure that gives doctors a record of the heart’s electrical activity. That information can help them detect structural or electrical heart defects that could lead to sudden cardiac arrest. The tests ordinarily would cost $100-150 in a doctor’s office, said Firestone, whose daughter, Gracie, survived a sudden cardiac arrest incident a few years ago.

To the Till family, that January test was priceless.

“It honestly saved my life,” Till said.

After reviewing Till’s electrocardiogram, pediatric cardiologists on site recommended a follow-up appointment, where it was confirmed that Till had Wolff-Parkinson-White Syndrome, a condition that can cause very rapid heart beats.

Heart In The Game Founder/Director remembers that day. "It was our first event ever. Joe went through the screening. A pediatric cardiologist from Nemours was on site. He took a look and said 'let's do that one again'. The second screening had the same result. The doc called Joe's father over. 'What is Joe playing now?' Mr. Till said he was on the wrestling team. The doc said 'he must stop wrestling now and you must see a cardiologist next week'. Two weeks later Joe had a 9 hour procedure at Nemours. 6 weeks after that the doc said, 'hit the playing field. You're good to go!'