Surrounded by student athletes from Middletown High School on the first day of school, Governor Markell signed legislation that requires the Delaware Interscholastic Athletic Association (“DIAA”) to draft regulations to identify symptoms and risk factors of sudden cardiac arrest in student athletes. The legislation aims to better identify at-risk students who participate in youth sports and raise awareness among coaches and administrators. Senate Bill 205, which notes that Sudden Cardiac Arrest is the number one cause of death of student athletes while participating in practices and games, also helps ensure schools are better prepared to respond quickly and effectively should an incident occur.

"Youth and high school athletics offer a phenomenal opportunity for students to learn life skills -- good sportsmanship, teamwork, overcoming adversity -- while also providing them with regular exercise that promotes their physical health and well-being,” said Governor Markell. “We must take responsibility for doing everything we can to promote the health and safety of these athletes and Senate Bill 205 recognizes that we have the ability to greatly diminish the threat of sudden cardiac arrest. Today marks important progress in ensuring Delaware schools are better equipped to prevent and respond to this frightening condition." 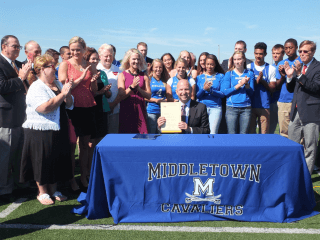 As a result of this law, the Delaware Interscholastic Athletic Association will develop rules for schools to deal with awareness, recognition, and management of sudden cardiac arrest in student-athletes. At a minimum, each school must give coaches and officials information on sudden cardiac arrest, including warning signs.

In addition, students and their families will need to sign a sudden cardiac arrest information sheet; athletes will answer questions about heart history before they participate; and schools will ensure all head coaches undergo CPR certification that includes training on the use of an automated external defibrillator.

Words From Our Sponsors

Bill sponsor Sen. Bethany Hall-Long, D-Middletown, said the law reinforces actions already being taken by the Delaware Interscholastic Athletic Association. Hall-Long, who authored a law requiring screenings for athletes who may have suffered a concussion, has been on the forefront of protecting the health of young athletes.

“Thanks to the tireless efforts of health advocacy groups and of Grace and the Firestone family, we’re here to provide new protection for young athletes,” Hall-Long said “With the training and information this law requires, we’re going to give young athletes a better chance of surviving, if they should suffer a sudden, unexpected cardiac incident while they’re on the field.”

“It’s shocking to think that these sudden, unexpected heart attacks are the No. 1 killer of young athletes, but that’s the case,” Townsend said. “We know that, in some cases, quick reaction can save the lives of these young people which is why I supported the training this law will require.”

Added Sen. Cathy Cloutier, R-Heatherbrooke, “As a member of the General Assembly, it is my responsibility to work on and promote legislation that will serve the people of Delaware, including student athletes. I am honored to have had the opportunity to play a role in SB 205. Because of this bill that’s being signed today, young lives in our state will be saved.”

Rep. Mike Ramone, R-Pike Creek South, also a co-sponsor of the bill, stated, “As a person who has dedicated his entire adult life to running health and fitness clubs and sports programs for our young athletes, I am very proud to have helped champion this important legislation. I believe that we are making a life-saving commitment to our student athletes and their families by enacting this bill.”

SB 205 is known as the Grace Firestone Act, named for a former three-sport star at Tower Hill, who also excelled in the classroom, exemplifying the value that athletics can have as part of the educational experience. Now Grace, who attended the bill signing, is one of the rare survivors of Sudden Cardiac Arrest, having collapsed in her home two days after her high school graduation.

“Today, Delaware joined the increasingly pertinent nation-wide movement to provide high-school coaches, parents, and students with lifesaving CPR information,” Firestone said. “Because of persistent legislators and organizations dedicated to raising SCA awareness, Delaware is working to shift the balance to make SCA survival less of a far-reaching miracle and more of a prevailing standard. I will continue to live in gratitude for those family members, policemen, and EMT's who never gave up on my life, and promise to forever work with passion, heart, and purpose to pay that commitment forward.”

She attends the University of Delaware and has started a charity to provide athletic equipment to disadvantaged children. At the bill signing, Markell said her story "reminds us why we’re here and it helps inspire us to see that we can do more to protect our kids."

At the signing of The Grace Firestone Act is the 9th such bill in the nation. As of November of 2105 there were ONLY NINE states with similar legislation. THAT IS RIDICULOUS.For those from other states who would wish information for your legislators, please connect with me! This is a wonderfully collaborative bill, molded by all the statewide stakeholders AND budget neutral.